What are the typical tasks performed by business operations (“bizops”) people? How can someone get into bizops, and what skill sets might they need? These are just some of the questions that Regan Bozman, Director of Business Operations at CoinList, answered in Sourcetable's latest interview exploring the changing role of Bizops in startups.

Here are the key highlights:

CoinList is a digital assets trading platform that spun out of AngelList. Coinlist runs a marketplace where digital asset companies run their token sales, and has its own exchange where people can trade cryptocurrencies.  Coinlist’s product solutions include token sales, cryptoasset trading, asset staking, crypto wallets wallets, and DEFI lending and borrowing.

Regan, how did you start working in bizops at CoinList?

My first job out of college was as Chief of Staff at a company called Handy. Although my role didn't have bizops in the title, what I did was akin to a bizops role. I was effectively a jack of all trades.

When I moved to San Francisco about five years ago, I started working as an Analyst on the investing team at AngelList. And that's what led me to be the first employee to jump over to CoinList, where I also started doing a jack of all trades role in Business Operations.

What does your job entail on a day-to-day basis?

Being in bizops means different things in different places, but I would say that bizops at CoinList is much more externally facing than it is in a lot of other companies. Our contracts, at least from the token sales side, are generally quite large. They look a bit like consulting agreements. Typically, we tend to work with a company for 3-9 months to bring them to launch.

But some of the work we do is also around software. For example, we build things to facilitate Dutch auctions and do a lot of work around compliance. There's also a more strategic side to it, where we look at how to position a product to market, how to structure offerings, etc.

We also take care of tasks that are more traditionally linked with bizops, like working with business intelligence (BI) tools, analyzing data to understand previous offerings, structuring it, packaging it up, etc. But a lot of the work we do is more external and around helping teams bring products to market. So I'd say my role is a combination of internal jobs and some more external-facing ones, like strategic account management.

How do you define bizops?

It seems that bizops changes from company to company. But I think, at its core, it's a cross-functional business role. I've certainly noticed the trend of bizops people being used as cross-functional generalists, but you also need analytical and strategic skills.

I also believe there's a difference in the bizops role between the early stages and the later stages. I would imagine that at a late stage bizops are more akin to an internal consulting function where people act as internal consultants and help different teams in the business analyze data. But in the earlier stages, bizops is more about taking on different responsibilities and providing leverage on the parts of the business that need it.

What kind of skills do you think someone working in bizops should have?

The common theme I’ve seen in everyone I’ve hired is the ability to get things done quickly. It’s different if you’re a more mature company, but building a new company isn’t sexy. A lot of things need to happen and often they don’t fall on anyone’s plate. So someone needs to step in, own them, and get them done - and that's often bizops.

In terms of work skills, I think a moderate level of Excel is useful. In my experience, bizops people aren’t required to build complex financial models. But knowing formulas and being able to analyze large data sets is certainly useful. Knowing SQL is by far the biggest skill I would recommend, certainly for every tech company that uses a relational database. Some companies may have a specialized data team, so SQL might be less of a requisite. Having said that, given the choice, I would definitely hire someone who can pull data from a database correctly on day one.

Generally speaking, I think if you want to work in bizops, the more technical you are the better. Although when hiring, I’ve never screened anyone for their ability to code, for example.

How many people does CoinList have the moment?

About 30 - and I was the first employee to jump over from AngelList just over 3 years ago. When we started, we didn’t have a defined bizops function - the role was more centered around answering customer support tickets and selling. In fact, I did sales for the first 6-12 months. For us at the beginning, bizops almost acted like a catchall phrase. And I imagine that’s similar for a lot of companies, at least at the start.

What's the mandate for bizops at CoinList?

At CoinList, the BizOps mandate is tied to a specific line of business – token sales. So our targets, which are assigned every quarter by our CEO, are primarily revenue-driven. We almost act like a sales team - we are given deals and we work through them. We also determine how much capital is going to go into each sale, how many people are going to participate, etc.

When do you think is the right time for a start-up to hire a bizops team?

I would say it depends on what founders need. If a company is selling self-serve software and doesn’t need a lot of support after the sale, then hiring a salesperson might be all they need.

But if the organization has a diverse set of business needs across various areas of the company that don't require a full-time hire, then maybe it's time to invest in a bizops person. And this can be someone who is smart and capable and who can take a lot off the founders' plate. Some people may call this role a 'generalist' while others would call it bizops.

What’s an example where bizops added a tonne of value?

Even though I didn't hold a bizops title, I feel that in my previous position at Handy I worked in a more traditional Business Operations role. And I think a bizops resource can come in and add value by picking up business lines, taking tasks and responsibilities off people's plates, and creating leverage.

As an example of this, at Handy, we had business people who were either too senior to write SQL queries or who didn't know how to. They’d typically ask engineers to do it, but that was draining the engineering resources. So by having bizops people pull data directly from the database, analyze it, and package it up, we were able to free up some engineering resources. And that's a value add.

Also, at Handy, the marketing resources were focused on the finance side - driving customers in. And at some point, we had a shortage of workers on the platform. So by having me on board as Chief of Staff, I was able to spend 30-40% of my time focusing on that growth function. I picked it up until it made sense for the company to dedicate full-time resources to it. So the value add, I believe, comes from the combination of taking care of certain areas of the business as needed, and freeing up resources from other dedicated teams.

What are the dashboards you can't live without?

Token sales business looks a bit like an investment bank and an IPO. Sales don’t happen every day, but when they do happen, they are fairly big. So at CoinList we spend a lot of time looking at data when preparing for an offering, for example – we look at capital, trends, users from specific countries, repeat capital development across our ratings, etc. And we use that information to forecast how well we think things are going. So I’d say the process it’s more ad hoc, rather than me having a dashboard I check on a daily basis.

What are the most important tools you use to run your business?

Google Docs and Notion, certainly. Notion allows us to combine different things into one, whether it’s note-taking, Project Management, or collaborative work. If you're just editing a document collaboratively, it's still not as good as Google Docs, but I find it very good. It’s organized, and you can work well with others. You can also do things like task management within it. But it definitely doesn’t replace Google Docs.

In terms of tools, I’m also a big fan of the software known as Sisense, which was Periscope at the time, as a Business Intelligence database. That’s where I definitely spend the majority of my time.

How has bizops evolved over the last 5-10 years?

I think part of the reason why bizops has become more popular over the past 10 years is that you have a lot of people coming in from consulting firms. Tech has certainly gotten hotter as a sector. So you have these smart, capable, business people who don't necessarily have a specialised skill set in sales, for example, who fit nicely into a bizops role. And I believe bizops is an emerging role, partially because it creates an obvious funnel for these people to step into.

What advice would you give to someone who wants to break into a bizops role?

I’ve seen a lot of people getting into bizops straight out of college as a lot of earlier-stage tech companies don’t necessarily want to hire fresh grads in their business side. So you see a lot of programs on LinkedIn, for example, where they hire people right out of college. I'd say it's always easier to go from a bigger company to a smaller one than the other way around.

So I think generally, if someone has just come out of school and wants to work in tech, my tip is to go for a top tier tech company. It doesn't really matter what the company sells because your job is so far removed from the actual product that the product itself isn't going to impact your day-to-day role. But if you spend a couple of years working at Dropbox, for example, or a company at that level, you can probably go wherever you want after that.

If you want to check out vacancies at Coinlist, head over to the Careers section of their website.

Thank you, Regan for your time and valuable insight. If you want to connect with Regan, you can find him on Twitter, @reganbozman, and on Medium.

Sourcetable Product Updates // Visualizations, Integrations and Invites! // Jan 10, 2022 Hello Sourcers! Welcome to 2022. I hope your holidays season was restful, COVID free, and full of data. We have some exciting updates to share, not least of which is that Sourcetable is now 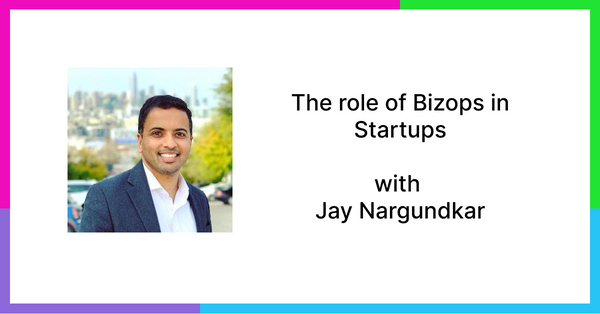 What is bizops? How does it best support the needs of the organization? Sourcetable sat down with Jay Nargundkar to find out.